In 2018, Boliden initiated a pilot project with electrified transport in the Aitik mine in Norrbotten. A 700-metre electric trolley line was installed, and four mine trucks were converted for electric operation. The pilot project was successful and its evaluation resulted in the expansion of the Aitik system. 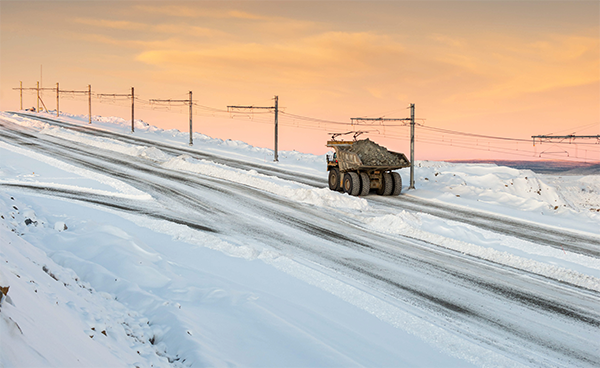 In addition, a completely new electric road system is under construction in the Kevitsa mine in Finland.

– We primarily see three good reasons for this: better work environment, increased productivity, and reduced greenhouse gas emissions. In addition, the overhead lines mostly consist of copper mined in Aitik, which demonstrates the importance of the role of the mine in the transformation of the transport system, says Rikard Mäki, project manager at Boliden.

This is the first time that a mine in the Arctic climate has used an electric road, and the pilot project has encountered one or two problems in the climate.

– The cold, among other things. The cold caused difficulties with the link between the vehicle and the overhead line when the current collectors would not rise. We solved this by redesigning the system so that hot oil circulates in the lifting devices, says Rikard Mäki.

– We expect greenhouse gas emissions from our transport to be reduced by almost 20 per cent in the first stage at Aitik's mine and 18 per cent in Kevitsa, says Rikard Mäki.

The Swedish Energy Agency contributed SEK 9.7 million to support the pilot project, which cost a total of SEK 39 million.

The application was made to the Swedish Energy Agency in February 2018 and is a good example of how transition can be implemented quickly. As early as October 2019, Boliden decided to continue to electrify its transport. In addition to the knowledge, the next stage will involve research at an early stage of the projects.

– We have linked up with a PhD student from Chalmers University of Technology who is helping us move the system forward from the pilot project to becoming a sustainable operational system in the future, regardless of where we want to electrify, says Rikard Mäki.

There is great interest in Boliden's investment in electrification, although electrified trucks are nothing new. But the very combination of the cold climate and electrification means that many are following the project with interest.

– Electrically powered mine trucks have been in operation before. Trials were carried out as early as the 1980s in South Africa, for instance, but today the number of mines around the world that use the technology can be counted on the fingers of one hand, and Boliden is one of them. It feels really good to be part of a sustainable transition, says Rikard Mäki.

Some results from the Aitik pilot project:

This project contributes to the Swedish goal zero net emissions of greenhouse gases by 2045.